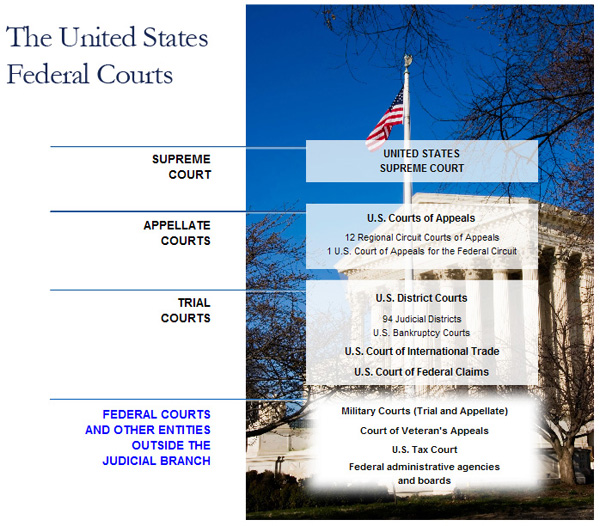 Where the Executive and Legislative branches are elected by the people, members of the Judicial Branch are appointed by the President and confirmed by the Senate.

Article III of the Constitution, which establishes the Judicial Branch, leaves Congress significant discretion to determine the shape and structure of the federal judiciary. Even the number of Supreme Court Justices is left to Congress — at times there have been as few as six, while the current number (nine, with one Chief Justice and eight Associate Justices) has only been in place since 1869. The Constitution also grants Congress the power to establish courts inferior to the Supreme Court, and to that end Congress has established the United States district courts, which try most federal cases, and 13 United States courts of appeals, which review appealed district court cases.

Federal judges can only be removed through impeachment by the House of Representatives and conviction in the Senate. Judges and justices serve no fixed term — they serve until their death, retirement, or conviction by the Senate. By design, this insulates them from the temporary passions of the public, and allows them to apply the law with only justice in mind, and not electoral or political concerns.

Generally, Congress determines the jurisdiction of the federal courts. In some cases, however — such as in the example of a dispute between two or more U.S. states — the Constitution grants the Supreme Court original jurisdiction, an authority that cannot be stripped by Congress.

Resources for the Supreme Court The Supreme Court of the United States is the court of last resort in the United States. Many of the cases the Court reviews center around the U.S. Constitution.  The links below are designed to provide some brief background information on the history of the Court, the Justices of the Court, and the Court's practice and decisions.